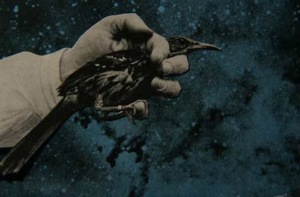 The word ‘Pettifogger’ is an archaic term used to describe a small-scale con-man or petty criminal.

This abstract crime film, collaged from thousands of individual cut-outs taken from playing cards, poker markers and battered original photos, describes the failing career of a gambler and small time thief in the early 60s.

The animation is built up with intense image repetition, flashing lights and stunning shots; bewildering blurs, ultimately set to the droning sounds of an ominous storm which becomes hypnotic as the viewer is transported through the controlled chaos. Challenging but wholly intriguing, Klahr’s piece is designed, he says, to put the viewer into a reverie – to move the audience into different states of consciousness over 65 minutes.