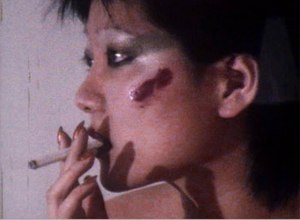 The Image Has Cracked

Punk perspectives from Pittsburgh and New York City
This month we bring you two unique but parrallel visions capturing the immeadiacy and energy that fizzed through the cultural scene during the late 70s and early 80s. The ‘movement’ ignited in Europe and America and its aftershocks shifted personal and political outlooks aound the world. These two films were made at (and of) the moment, two radical female artists reporting from inside the New York and Pittsburg scenes and examining key participants in facinating detail ….

Fresh from Ireland and having no experience of making films, Vivienne Dick’s arrival in NYC landed her right in the middle of a punk revolution. This, her first film, uses eight rolls of Kodak sound Super-8 film to profile eight women in real time and without any editing. The ‘subjects’ include Pat Place and Adele Bertei, former band members of the Contortions, as well as Lydia Lunch, singer, guitarist, film-star and punk doyenne who would also appear in later films. 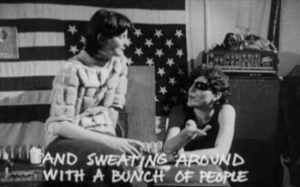 A film about a bunch of punk kids in Pittsburgh, the film follows Bill Bored, drummer of Pittsburgh punk band the Cardboards, as he goes to parties, plays shows, goes to the record store, hangs out in his dingy apartment, and gets with one of the members of girl band the Dykes.

For Beroes, the Pittsburgh punk phenomenon is a brand of ‘folk’ or ‘primitive’ art. In keeping with this style, she has chosen not to make a slick rock-and-roll documentary, she films using pans and slow dollys as a strategy for capturing small glimpses of the musicians at work.

The film is highly structured and intermixes documentary with acted footage, making great use of captions and ‘subtitles’ as counter-points to draw our attention to the verbal and visual discourse.

With music by The Cardboards, The Snakes, Hans Brinker and The Dykes.