This programme brings together two works which span the evolution of the Surrealist experiment.  Created by two pioneering avant-guardists, Dulac and Deren take us on a journey through time and space that has become stretched, condensed or frozen; where each gesture and object is loaded with symbolism and ritualistic significance.

We are also excited to announce that Jon Wesseltoft will perform a live electronic soundtrack to ‘Seashell and The Clergyman’ with specially gathered material.

A strange wind surrounds and entrances Rita Christiani as she enters an apartment to find Maya Deren immersed in the ritual of unwinding wool from a loom; she becomes transported by the ritual.

This film attempts to illustrate the way that our minds work when recalling events, experiencing something traumatic, uncomfortably engaging in social activities, and the many starts and stops of time as the distorted chronometers of our mind’s eye fixate on a place or event. 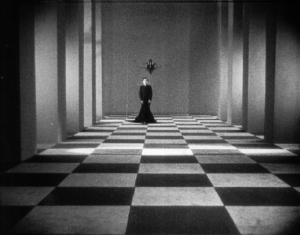 This work is the cinematic masterpiece of Germaine Dulac, mother of the French avant-gard. Dulac is also believed to be one of the very first feminist filmmakers and this work is considered the beginning of Surrealist film (coming out one year before Bunuel’s ‘Un Chien Andalou’). Many have tried to interpret this film from various perspectives but it has remained an enigma.

The British Board of Film Censors banned the work in 1929 with the following comment: ‘This film is so cryptic as to be almost meaningless. If there is a meaning, it is doubtless objectionable.’ Dulac wrote ‘The visual symphony which I dream of creating … will escape all literary logic in order to work, as a musician does, only with feelings’.

John Wesseltoft has a background in installation music, drone, noise and improv. He is active performing solo and in ensembles Maranata, Tongues of Mount Meru and Dogun. Wesseltoft has previously performed with C. Spencer Yeh (Burning Star Core), Lasse Marhaug, Sayaka Himeno, Maja Ratkje and Snorre Ruch , among others.