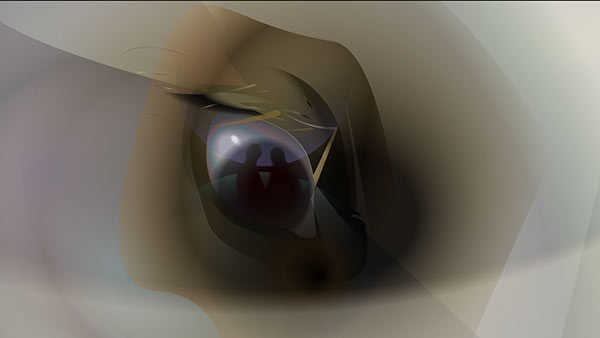 We are proud to present two extraordinary films which are pushing the moving image into unexplored territory. London based filmmaker Sebastian Buerkner will be present to introduce his film, and that of his fellow 3D explorer, Canadian, Blake William.

Sebastian Buerkner’s Chimera of M (2013) uses stereoscopic digital animation to create a hallucinatory, fragmentary drama. As viewers we find ourselves behind the eyes of an unseen and distinctly unreliable protagonist, who is attempting to re-engage with two abandoned relationships. The film uses 3D to plunge us headlong into a world of shimmering translucent layers, in which we are never sure about the boundaries of either objects or relationships.

Blake William’s highly acclaimed Prototype (2017) draws on a range of footage – images from the 1900 Galveston Hurricane, footage of a rodeo – and gradually propels them towards an extraordinary, stereoscopic pitch of abstraction.

“[Prototype] seems to exist in multiple temporal spheres at once. Midway through, a stunning interlude in which the disembodied vocals of Marilyn Monroe float atop the sound and fury of a slowly undulating, digitally modulated seascape uncannily echoes a similar sequence in the epochal eighth episode of Twin Peaks: The Return. By returning to the past through the technology of the present, Prototype unassumingly crosses the line from forward-thinking to downright clairvoyant” (Jordan Cronk, Film Comment).

This edition of The Dream That Kicks is part of Sad Disco Fantasia, a series of screenings and events taking place in Oslo 8-11 February, in collaboration with Kunsthall Oslo and supported by Kulturrådet – see www.kunsthalloslo.no for more details.