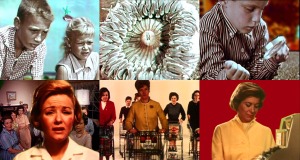 Balch’s attempt to find a cinematic equivalent of William Burroughs’ writing: a collage of all the key themes and situations in the books, with Burroughs narration, cut up film techniques and the dream machine. As the great man says, “when you cut into the present the future leaks out”.

Vicki Bennett is People Like Us; since 1991 she has been animating and re-contextualising found footage with a witty and dark view of popular culture, both pre-recorded and through her live performances.

This piece has been carefully constructed using industrial and documentary film footage from 1940-1975 to follow the endless chug of the conveyer belt of life. Pieced together in a symphony of movement and metamorphosis, the film illustrates the endless whirr of activity in our pursuit of meaning and happiness.

A collection of visual and auditory ideas, many of which seem to radiate a sense of internal conflict, irony and rage. The film is made up of dozens of performances dislodged from other contexts, relocated into contemporary industrial landscapes, or interrupted by the chopping, shredding, or flattening of special-effects technology turned against itself.